OpenBB Terminal is available on all major platforms. With Windows and macOS you can make use of an installation file as found below. Furthermore, it is also possible to install the OpenBB Terminal with Docker or directly through Python which also offers support for Linux.

This section provides you with the installation file as well as the guide to install the OpenBB Terminal via Windows.

Step 1: Double-click the .exe file that got downloaded to your Downloads folder 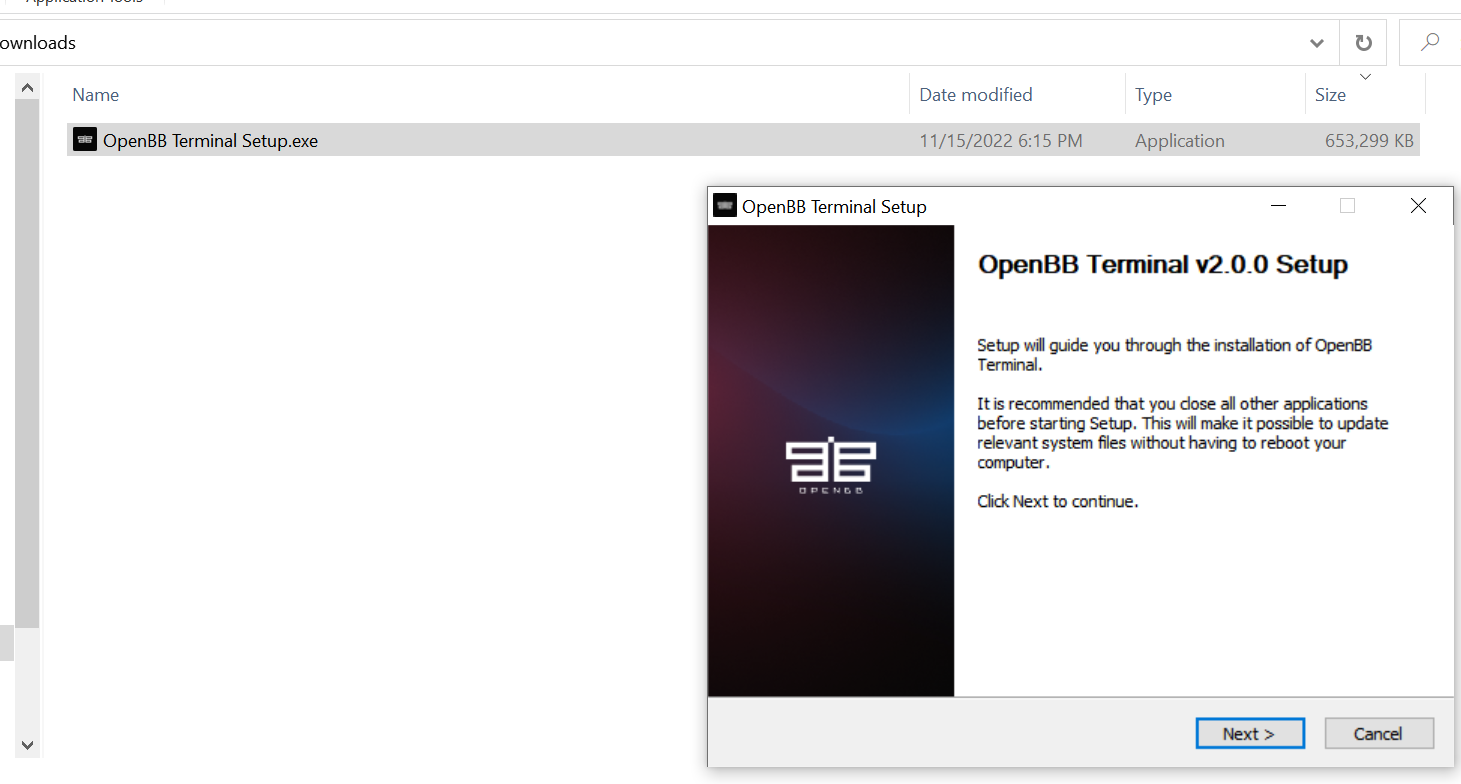 Step 2: Follow the prompts clicking Next > where needed to complete the installation process

Step 3: Double-click on the application that appeared on your Desktop, you are now able to run the OpenBB Terminal

The first time this takes a bit longer to load, this can take up to a few minutes. If everything was successful you should see a screen like the one below : 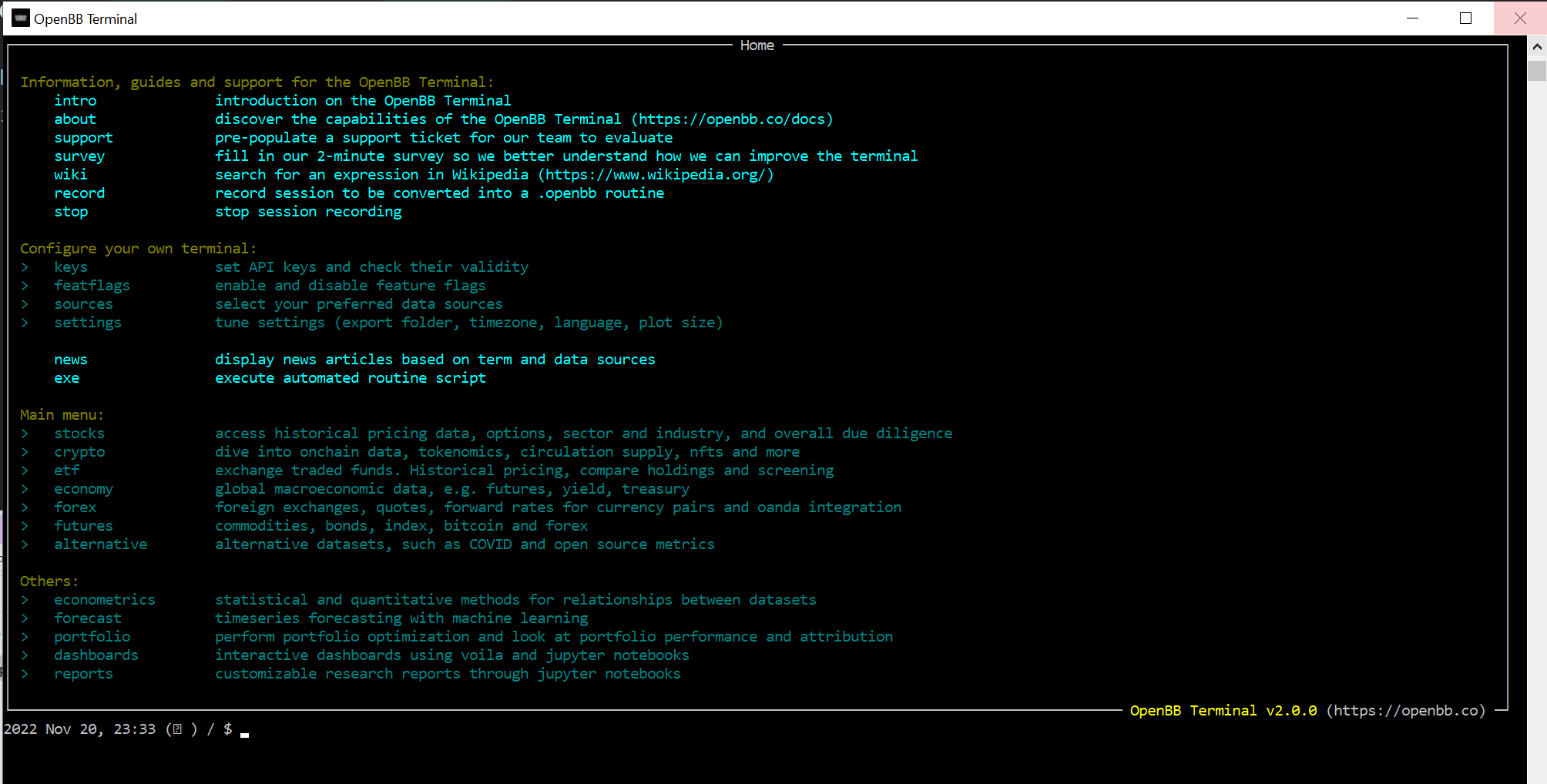 For Mac there are two installers available, one for Intel and one for Apple Silicon (M1). Please download the correct one for your machine.

A link to the Applications folder is presented on the screen. Note that this should take some time as it is extracting the files from the .dmg file. 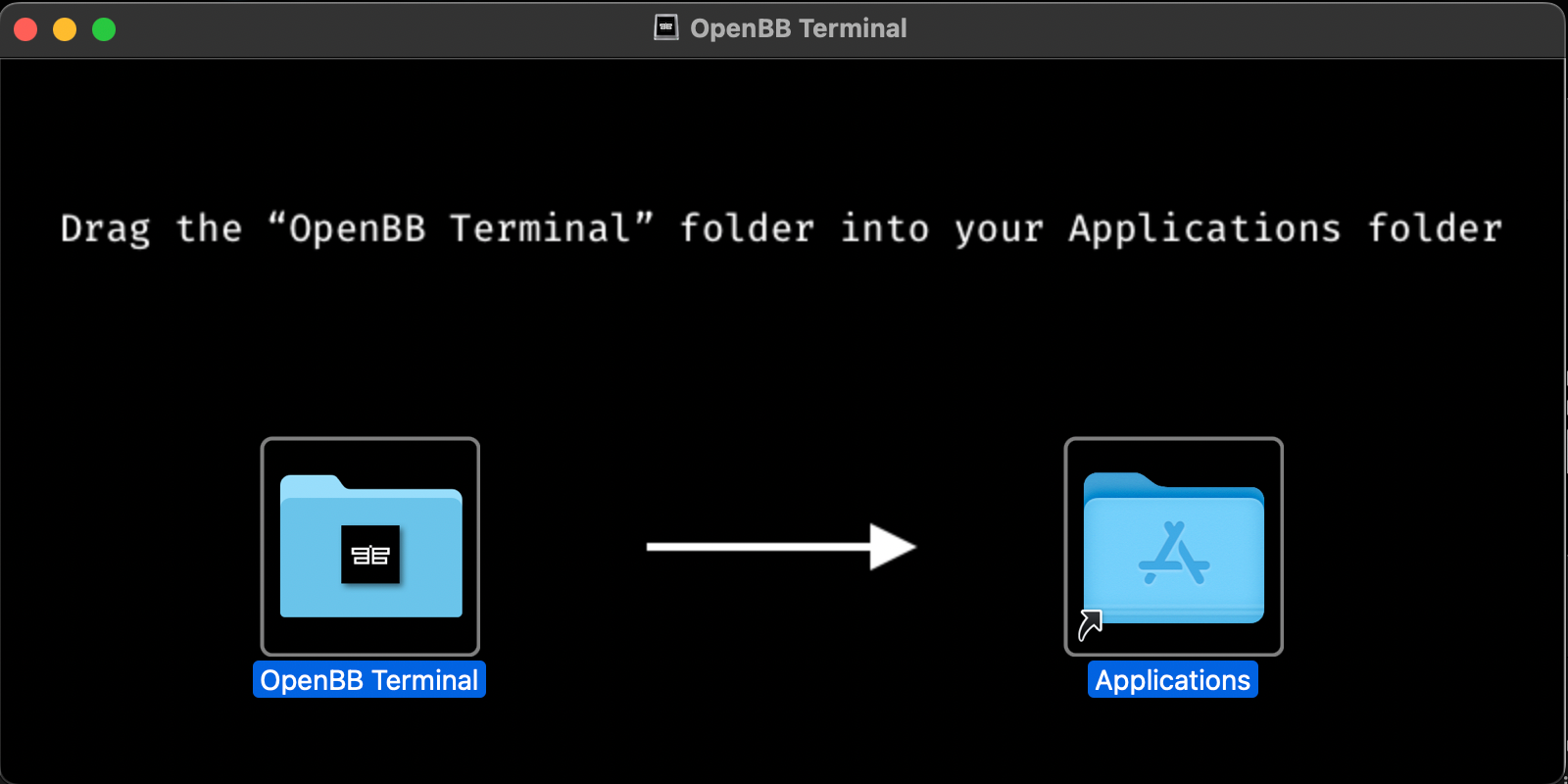 Step 2: Open the OpenBB Terminal app in the folder that you have just copied to your Applications. 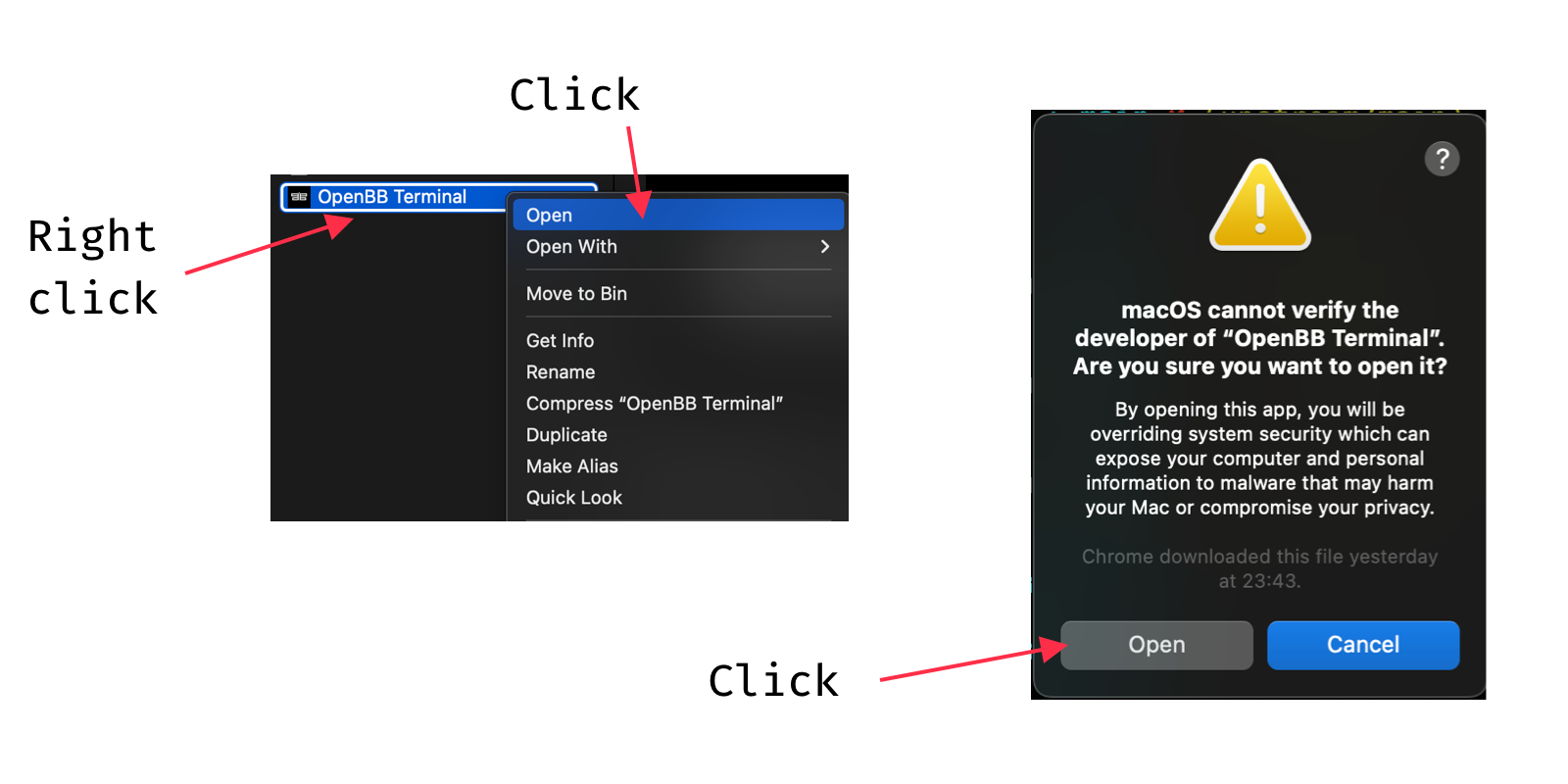 Installing the OpenBB Terminal via Docker supports both Windows and Unix systems (Linux + MacOS). Installation differs a bit between operating system (Windows, macOS and Linux). Please select the section matching to your OS.

If you have something like this, it means you haven't started Docker:

Start Docker, this is how the right output looks like:

To display charts with your container, you need : VcXsrv.

This file contents the settings to pull and run OpenBB Terminal Docker image.

Install and run Docker Desktop as describe above in this document.

Then on Preferences > Security.

Make sure both of these options are enabled: 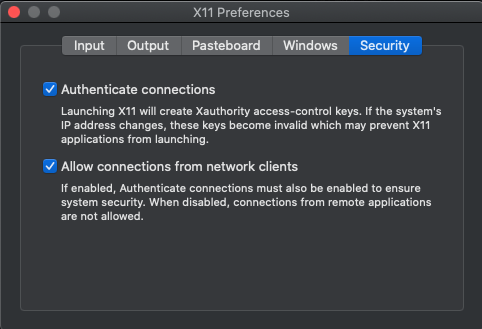 To get Docker IP you can use this command:

This file contents the settings to pull and run OpenBB Terminal Docker image.

The xhost +$IP and DISPLAY=$IP:0 parts are there to allow charts display.

Install and run Docker Desktop as describe above in this document.

Note: if you're using remote docker host, you can connect with ssh -X <FQDN/IP>.

To run directly the docker image you can use the following command:

This section guides you a long to install the OpenBB Terminal via Python. This installation type supports both Windows and Unix systems (Linux + MacOS).

NOTE for Windows users: For Windows users who prefer to use an environment similar to what Linux and macOS users use, we recommend Windows Subsystem for Linux (WSL). WSL emulates a Linux machine inside your Windows system. If this is the case - jump to the Installing WSL (Only for Windows users) section before proceeding.

These steps are common in all operating systems (Windows with or without WSL, MacOS or Linux).

This project supports Python 3.8 and 3.9. By default, the newly created virtual environment will use Python 3.9.13

Our current recommendation is to use this project with Anaconda's Python distribution - either full Anaconda3 Latest or Miniconda3 Latest (recommended). Several features in this project utilize Machine Learning. Machine Learning Python dependencies are optional. For MacOS systems, the "Miniconda3 MacOSX 64-bit" version that works on both Intel and M1 macs is recommended.

NOTE: We recommend using conda and poetry because it just works. You can use other python distributions and use raw pip instead of poetry but you will very likely bump into installation issues.

Miniconda is a python environment and package manager. It is required if you want to have the dependencies working straight away.

On Linux or Raspberry Pi:

Check if you have homebrew installed by running brew --version

If you don't have homebrew installed run:

If you have homebrew installed run:

5. Navigate into the project's folder​

You can name the environment whatever you want. Although you could use names such as: welikethestock, thisistheway or diamondhands, we recommend something simple and intuitive like obb. This is because this name will be used from now onwards.

Please note, the following setup has been confirmed to work for all OS (including M1) with the standard miniconda distribution. If you are using a different distribution, you will need to install it manually before proceeding.

Or, to include machine learning type:

Note: At the end, you can deactivate it with: conda deactivate.

Install the main dependencies with

You are good to go with the core of the OpenBB Terminal. To install additional toolkits proceed with the following commands:

To install both the Portfolio Optimization and the Machine Learning Toolkit run:

9. You're ready to use the terminal!​

Start the terminal by running:

Or the old-fashioned way:

NOTE: When you close the terminal and re-open it, the only command you need to re-call is conda activate obb before you call openbb again.

TROUBLESHOOT: If you are having troubles with installation, check out the FAQ page. You can also reach for help on our discord.

If you are using a conda environment the build/conda folder contains multiple .yaml configuration files that you can choose from.

If you are using other python distributions we highly recommend that you use some virtual environment like virtualenv or pyenv for installing the terminal dependency libraries.

Requirements files that you can find in the project root:

You can install them with with pip

The dependency tree is solved by poetry.

Note: The libraries specified in the requirements files have been tested and work for the purpose of this project, however, these may be older versions. Hence, it is recommended for the user to set up a virtual python environment prior to installing these. This allows to keep dependencies required by different projects in separate places.

Installing WSL (Only for Windows users)​

If you are using Windows you first you need to install WSL. The process is simple and a tutorial can be found here. Once you reach the section Update Linux on that tutorial, you should have a linux machine installed and can proceed to the next steps.

Since WSL installation is headless by default (i.e., you have only access to a terminal running a linux distribution) you need some extra steps to be able to visualize the charts produced by the terminal (more detailed tutorial here):

After this, VcXsrv should be running successfully and we can proceed to terminal installation.